In fact, there are numerous known ways to approach the inferential modeling of ordinal outcomes, all of which build on the theory of linear, binomial and multinomial regression which we covered in previous chapters. In this chapter, we will focus on the most commonly adopted approach: proportional odds logistic regression. Proportional odds models (sometimes known as constrained cumulative logistic models) are more attractive than other approaches because of their ease of interpretation but cannot be used blindly without important checking of underlying assumptions. 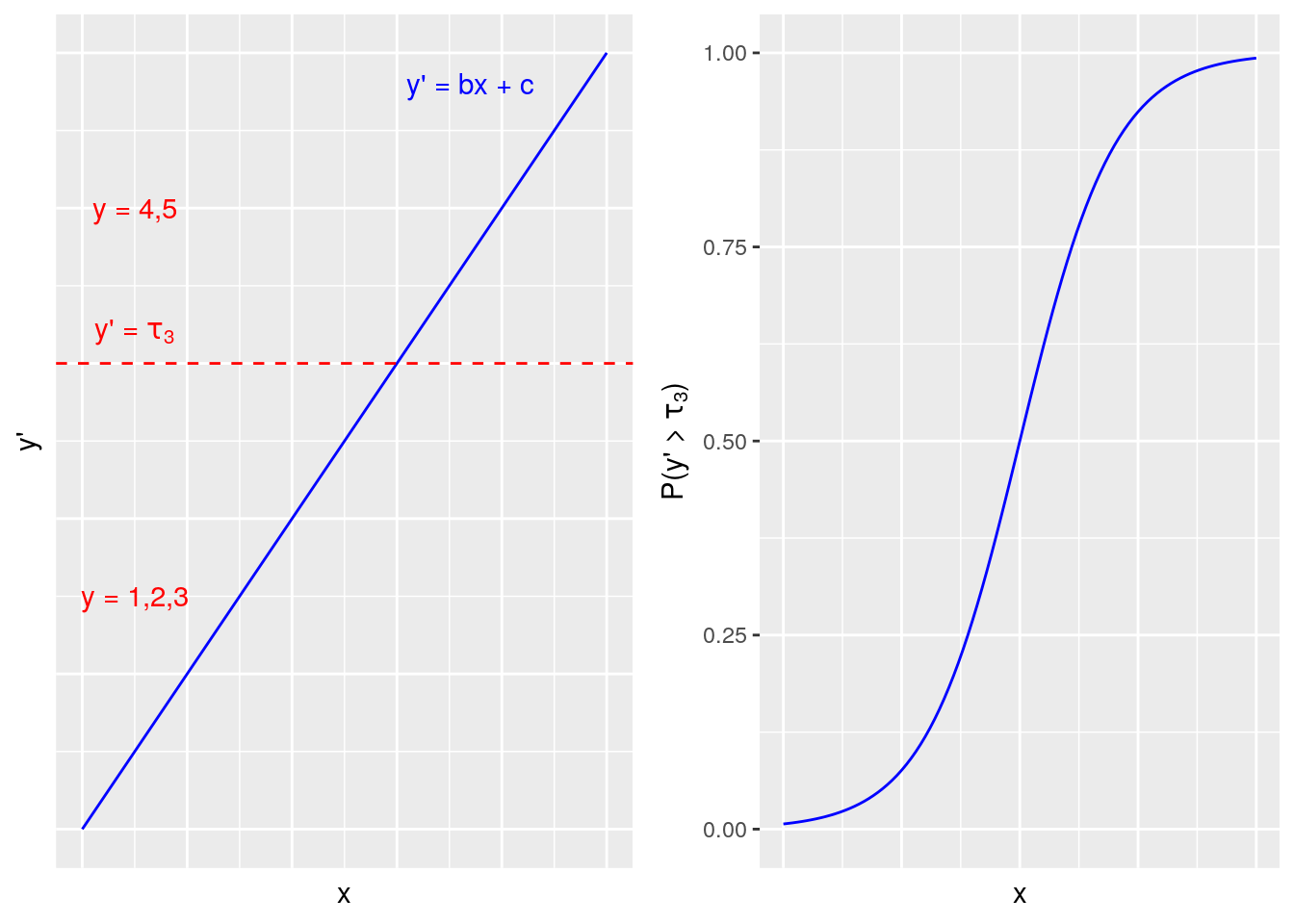 You are an analyst for a sports broadcaster who is doing a feature on player discipline in professional soccer games. To prepare for the feature, you have been asked to verify whether certain metrics are significant in influencing the extent to which a player will be disciplined by the referee for unfair or dangerous play in a game. You have been provided with data on over 2000 different players in different games, and the data contains these fields:

We also know that position, country, result and level are categorical, so we convert them to factors. We could in fact choose to convert result and level into ordered factors if we so wish, but this is not necessary for input variables, and the results are usually a little bit easier to read as nominal factors.

Recall from Section 4.5.3 that our linear regression approach assumes that our residuals \(E\) around our line \(y' = \alpha_1x + \alpha_0\) have a normal distribution. Let’s modify that assumption slightly and instead assume that our residuals take a logistic distribution based on the variance of \(y'\). Therefore, \(y' = \alpha_1x + \alpha_0 + \sigma\epsilon\), where \(\sigma\) is proportional to the variance of \(y'\) and \(\epsilon\) follows the shape of a logistic function. That is

By applying the natural logarithm, we conclude that the log odds of \(y\) being in our bottom category is

The MASS package provides a function polr() for running a proportional odds logistic regression model on a data set in a similar way to our previous models. The key (and obvious) requirement is that the outcome is an ordered factor. Since we did our conversions in Section 7.1.3 we are ready to run this model. We will start by running it on all input variables and let the polr() function handle our dummy variables automatically.

We can see that the summary returns a single set of coefficients on our input variables as we expect, with standard errors and t-statistics. We also see that there are separate intercepts for the various levels of our outcomes, as we also expect. In interpreting our model, we generally don’t have a great deal of interest in the intercepts, but we will focus on the coefficients. First we would like to obtain p-values, so we can add a p-value column using the conversion methods from the t-statistic which we learned in Section 3.3.134.

We can, as per previous chapters, remove the level and country variables from this model to simplify it if we wish. An examination of the coefficients and the AIC of the simpler model will reveal no substantial difference, and therefore we proceed with this model.

Recall from Section 7.2.1 that our proportional odds model generates multiple stratified binomial models, each of which has following form:

Similar to binomial and multinomial models, pseudo-\(R^2\) methods are available for assessing model fit, and AIC can be used to assess model parsimony. Note that DescTools::PseudoR2() also offers AIC.

There are numerous tests of goodness-of-fit that can apply to ordinal logistic regression models, and this area is the subject of considerable recent research. The generalhoslem package in R contains routes to four possible tests, with two of them particularly recommended for ordinal models. Each work in a similar way to the Hosmer-Lemeshow test discussed in Section 5.3.2, by dividing the sample into groups and comparing the observed versus the fitted outcomes using a chi-square test. Since the null hypothesis is a good model fit, low p-values indicate potential problems with the model. We run these tests below for reference. For more information, see Fagerland and Hosmer (2017), and for a really intensive treatment of ordinal data modeling Agresti (2010) is recommended.

Ignoring the intercept, which is not of concern here, the differences appear relatively small. Large differences in coefficients would indicate that the proportional odds assumption is likely violated and alternative approaches to the problem should be considered.

Load the managers data set via the peopleanalyticsdata package or download it from the internet35. It is a set of information of 571 managers in a sales organization and consists of the following fields: