In the previous chapter we looked at how to model a binary or dichotomous outcome using a logistic function. In this chapter we look at how to extend this to the case when the outcome has a number of categories that do not have any order to them. When an outcome has this nominal categorical form, it does not have a sense of direction. There is no ‘better’ or ‘worse’‍, no ‘higher’ or ‘lower’‍, there is only ‘different’‍.

A binary or dichotomous outcome like we studied in the previous chapter is already in fact a nominal outcome with two categories, so in principle we already have the basic technology with which to study this problem. That said, the way we approach the problem can differ according to the types of inferences we wish to make.

If we only wish to make inferences about the choice of each specific category—what drives whether an observation is in Category A versus the others, or Category B versus the others—then we have the option of running separate binomial logistic regression models on a ‘one versus the rest’ basis. In this case we can refine our model differently for each category, eliminating variables that are not significant in determining membership of that category. This could potentially lead to models being defined differently for different target outcome categories. Notably, there will be no common comparison category between these models. This is sometimes called a stratified approach.

However, in many studies there is a need for a ‘reference’ category to better understand the relative odds of category membership. For example, in clinical settings the relative risk factors for different clinical outcomes can only be understood relative to a reference (usually that of the ‘most healthy’ or ‘most recovered’ patients)30. In organizational settings, one can imagine that the odds of different types of mid-tenure career path changes could only be well understood relative to a reference career path (probably the most common one). While this approach would still be founded on binomial models, the reference points of these models are different; we would need to make decisions on refining the model differently, and we interpret the coefficients in a different way.

In this chapter we will briefly look at the stratified approach (which is effectively a repetition of work done in the previous chapter) before focusing more intently on how we construct models and make inferences using a multinomial approach.

6.1.2 Use cases for multinomial logistic regression

Multinomial logistic regression is appropriate for any situation where a limited number of outcome categories (more than two) are being modeled and where those outcome categories have no order. An underlying assumption is the independence of irrelevant alternatives (IIA). Otherwise stated, this assumption means that there is no other alternative for the outcome that, if included, would disproportionately influence the membership of one of the other categories31. In cases where this assumption is violated, one could choose to take a stratified approach, or attempt hierarchical or nested multinomial model alternatives, which are beyond the scope of this book.

Examples of typical situations that might be modeled by multinomial logistic regression include:

You are an analyst at a large technology company. The company recently introduced a new health insurance provider for its employees. At the beginning of the year the employees had to choose one of three different health plan products from this provider to best suit their needs. You have been asked to determine which factors influenced the choice in product.

The health_insurance data set consists of the following fields:

First we load the data and take a look at it briefly.

It looks like two of these columns should be converted to factor—product and gender—so let’s do that and then run a pairplot for a quick overview of any patterns, which can be seen in Figure 6.1. 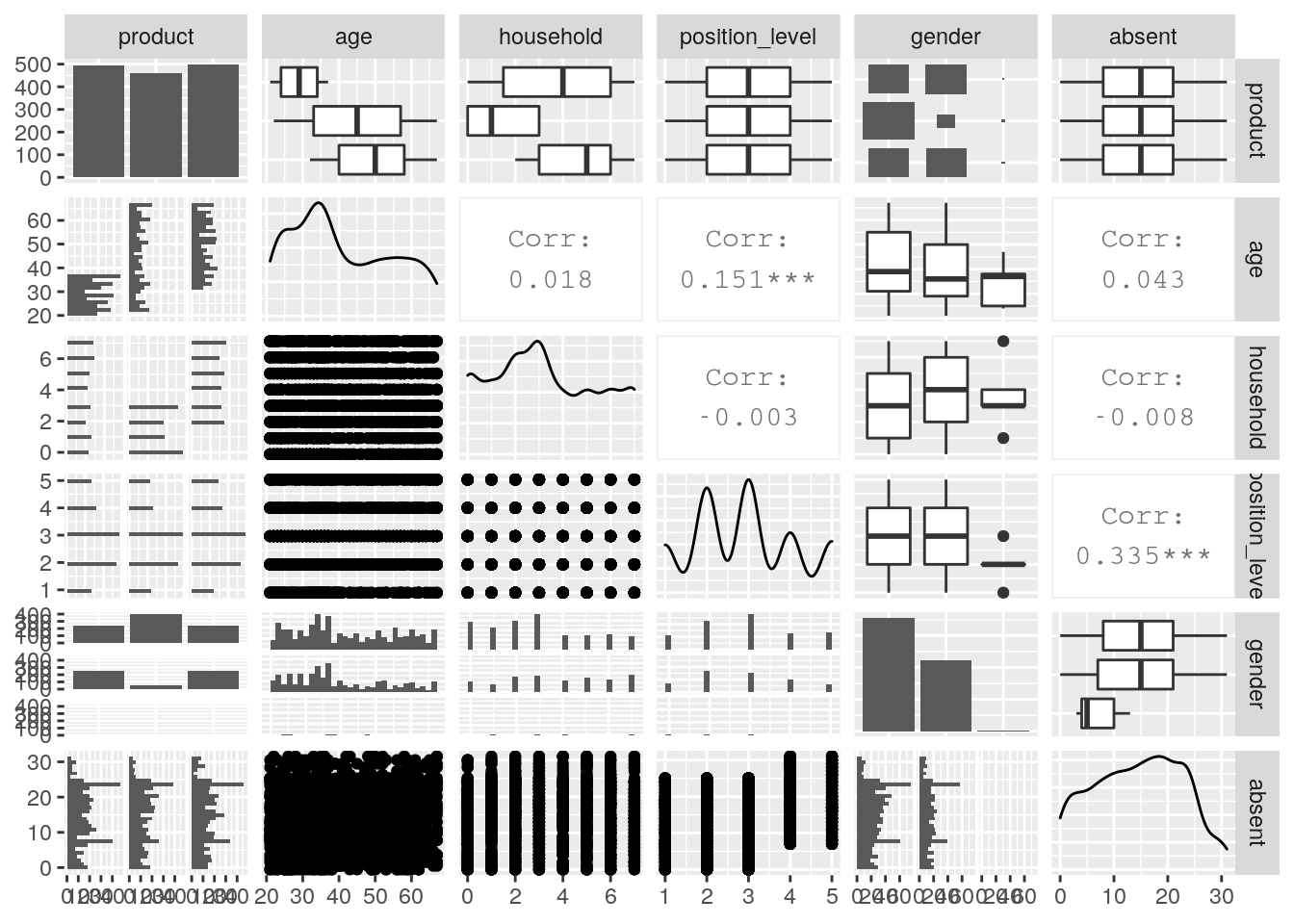 The data appears somewhat chaotic here. However, there are a few things to note. Firstly, we notice that there is a relatively even spread in choice between the products. We also notice that age seems to be playing a role in product choice. There are also some mild-to-moderate correlations in the data—in particular between age and position_level, and between absent and position_level. However, this problem is clearly more complex than we can determine from a bivariate perspective.

One approach to this problem is to look at each product choice and treat it as an independent binomial logistic regression model, modeling that choice against an alternative of all other choices. Each such model may help us describe the dynamics of the choice of a specific product, but we have to be careful in making conclusions about the overall choice between the three products. Running stratified models would not be very efficient if we had a wider range of choices for our outcome, but since we only have three possible choices here, it is reasonable to take this route.

6.2.1 Modeling the choice of Product A versus other products

Let’s first create and refine a binomial model for the choice of Product A.

These results need to be interpreted carefully. For example, the odds ratios for the Product A choice based on a simplified model are as follows:

As an example, and as a reminder from our previous chapter, we interpret the odds ratio for age as follows: all else being equal, every additional year of age is associated with an approximately 21% decrease in the odds of choosing Product A over the other products.

6.3.1 Defining a reference level and running the model

The nnet package in R contains a multinom() function for running a multinomial logistic regression model using neural network technology32. Before we can run the model we need to make sure our reference level is defined.

Once the reference outcome is defined, the multinom() function from the nnet package will run a series of binomial models comparing the reference to each of the other categories.

First we will calculate our multinomial logistic regression model.

Now we will look at a summary of the results.

Notice that the output of summary(multi_model) is much less detailed than for our standard binomial models, and it effectively just delivers the coefficients and standard errors of the two models against the reference. To determine whether specific input variables are significant we will need to calculate the p-values of the coefficients manually by calculating the z-statistics and converting (we covered this hypothesis testing methodology in Section 3.3.1).

This confirms that all variables except absent play a role in the choice between all products relative to a reference of Product A. We can also calculate odds ratios as before.

Here are some examples of how these odds ratios can be interpreted in the multinomial context (used in combination with the p-values above):

If the number of categories in the outcome variable is limited, this can be an efficient way to obtain the model coefficients against various reference points without having to rerun models. However, to determine standard errors and p-values for these coefficients the model will need to be recalculated against the new reference.

In Hosmer, Lemeshow, and Sturdivant (2013), a gradual process of elimination of variables is recommended to ensure that significant variables that confound each other in the different logistic models are not accidentally dropped from the final model. The recommended approach is as follows:

We can see that only genderNon-binary changed substantially, but we note that this is on an extremely small sample size and so will not have any effect on our model33. It therefore appears safe to remove absent. Furthermore, the Akaike Information Criterion is equally valid in multinomial models for evaluating model parsimony. Here we can calculate that the AIC of our model with and without absent is 1517.36 and 1514.25, respectively, confirming that the model without absent is marginally more parsimonious.

As with the binomial case, a variety of Pseudo-\(R^2\) methods are available to assess the fit of a multinomial logistic regression model, although some of our previous variants (particularly Tjur) are not defined on models with more than two outcome categories.

Due to the fact that multinomial models have more than one set of coefficients, assessing goodness-of-fit is more challenging, and is still an area of intense research. The most approachable method to assess model confidence is the Hosmer-Lemeshow test mentioned in the previous chapter, which was extended in Fagerland, Hosmer, and Bofin (2008) for multinomial models. An implementation is available in the generalhoslem package in R. However, this version of the Hosmer-Lemeshow test is problematic for models with a small number of input variables (fewer than ten), and therefore we will not experiment with it here. For further exploration of this topic, Chapter 8 of Hosmer, Lemeshow, and Sturdivant (2013) is recommended, and for a more thorough treatment of the entire topic of categorical analytics, Agresti (2007) is an excellent companion.

Use the same health_insurance data set from this chapter to answer these questions.